Getting back up: Work and play 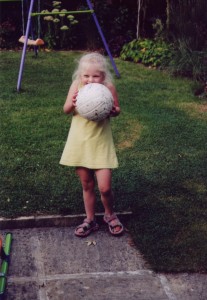 So now my life consisted of wheelchair rugby twice a week, working on a “therapeutic” basis, physiotherapy, and family life.  Although busy, I still wasn’t fulfilled; I still felt that my stature had changed.  I think it partly stems from society’s focus on the work ethic, or at least my perception of that.  I also realised that my ability to control my young daughter, Zoe, had reduced. Aged 3, she had learnt that Daddy couldn’t do very much physically.  One day, I was trying to stop her from doing something, and used the only threat I had left: turning off her favourite programme on TV.  At this point she took the remote control away and said “what you going to do now?”.  She also found using me as a static target for the garden hose highly amusing!

Although I was trying to get back to work, I was not given the responsibility or control that I had had previously.  I think that it was difficult for both the Company and me.  The jobs that I were given were small, simple, unchallenging, and largely not client facing.  I could no longer work the hours that I previously had, and I felt that they were uncomfortable putting somebody with such a profound disability in front of their clients; who are at the end of the day the people who pay the bills and create revenue.  There was one client that I was introduced to.  We all sat around a glass meeting table for several hours, and the medication that I was on meant that words were just passing through, and not really connecting.  During the meeting I could feel a tightness building in my stomach; although not a normal sensation, I could tell it was there.  All of a sudden a massive spasm flung me forwards face first onto the table, knocking water glasses flying.  Once there I couldn’t get myself back up, and needed help. This was obviously hugely embarrassing, and I think this was the last time I was put in front of a client.

Don’t get me wrong my employers were fantastic; they had automatic doors installed, a disabled loo, got a voice activated phone, and voice recognition software to enable me to write. I continued to go to work 14 hours a week for 4 years, but in truth I was just filling time.  There were some cutbacks in 2004, and I was made redundant. This was actually a relief, and enabled me to get on with my new life. 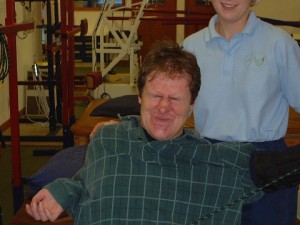 Pain at the National Rehabilitation Centre for the Paralysed. Similar pain can now be found at Physability near Stroud. But seriously, it did help!

Financially I was ok because thankfully I had a company insurance policy in place for people who are unable to work through illness or disability. Prior to my accident I had no idea that this was there; so as you can imagine it was quite a relief.  When you’re in your twenties and early thirties you think you’re invincible, well I did anyway. There is no way I would have knowingly taken out this policy, so I was grateful that my employers had.  From trying to tell my 17 year old daughter all the lessons I have learnt, I know that anybody under 35 will still be saying; “I don’t need that, it won’t happen to me”.  Well things happen to more people than you think.  “It could be you!” is unfortunately more likely to be an accident, illness, or disability than winning the National lottery.

I had been considering having tendon transfers in my arms done, and this seemed like a convenient time; it would help with my arm function and give me a bit more independence.  It was quite a major operation which involved disconnecting one part of my deltoid tendons, connecting a graft, and joining this to the tricep at the elbow.  This should then give me the ability to extend my arm upwards.  There was no guarantee of success, and each arm would take 3 months before I could put any weight on them.  A BIG decision to make.  I was in hospital over Christmas, and we had to do present opening on the ward. Not much fun for a 6 year old.  Rather than helping her to open her presents, I was, and still am dependent on her to open my presents.  I quite like that she does look after me like that.

While I could do even less than I could before, I decided that I needed some mental stimulation and took on an Open University course in Philosophy and Psychology.  The first unit was an introduction to humanities because I’d never been good at humanities.  I still have an ability to completely misinterpret poetry, why can’t they just say what they mean?  A poem that was clearly about the fear of being isolated in a scary cottage was apparently about sexual frustration, and another which was clearly about Catholic sexual frustration was apparently about the memory of her mother who had passed away.  Anyway, over 7 years I passed the course, and actually learnt a lot about people, identity, and society.  Previously I had been in quite a privileged, middle class environment, but now through the course and my new situation I could understand the difficulties that people can face, and the lack of control that they can have over their own destiny.  The drastic life change, and getting educated in a more human subject, has definitely changed me for the better; I am less judgmental, patient, and tolerant than before.

The operations were quite successful.  I could now lift my right arm above my head. The left arm wasn’t quite so successful. I think this was because a Care Assistant in the hospital turned me badly shortly after the operation. This was very painful, and resulted from him having very little grasp of English.  Don’t get me started on that one.

It took about a year after my 2nd operation before I was physically back to where I had been before.  In terms of wheelchair rugby it had not transformed me into a GB candidate. In fact I was still the 3rd or 4th choice 0.5 point player with the Cardiff Pirates (now Ospreys), and spent quite a sizeable amount of time on the sideline cheering enthusiastically.  It was always great to be part of the team, and the training is fantastic for fitness, and actually I find that although sometimes it causes pain, it actually alleviates the day to day nerve pain slightly.   While I’m playing it takes my mind away from the pain completely.

Even in disabled sport, there is still a bit of a hierarchy, and I often suffer from function envy.  Within wheelchair rugby there is a range from people who can walk and have slight loss of manual dexterity, down to those who can hardly push a wheelchair or pick up their beer.  There is huge camaraderie, and everybody looks after everybody else, even from opposing teams.  It’s a fantastic community to be a part of, but can be a bit frustrating when functionally you are unable to do what others can.  The classification system helps this to a point, but there is still a huge range of functional ability within a band.

This slideshow  is one of the funniest moments in my wheelchair rugby career.  Our 2 key players were picked out of the game which left me and Jim (another 0.5 player) to try to score the goal.  In rugby there is only 40 seconds allowed to do this.  Typically 0.5 players don’t handle the ball, and for good reason.  Jim got stopped and miraculously got the ball to me; I was away.  It was the dying seconds of the game, we were losing by at least 30 points, and their number 1 decided to let me score it.  He stayed alongside me all the way up the court, and at one point actually hit one of his own players to stop him impeding my progress.  10 seconds was coming up and I had to bounce the ball.  I dropped it!  After 2 attempts at picking it up, I thought that number 1 was going to pick it up for me, but he didn’t and I managed to get it up myself.  I then continued to race slowly towards the line to score.  There was a rapturous applause and laughter.  I’d just made it with 7 seconds left on the clock.  There were another 20 frames.

Although I love wheelchair rugby, it was not something I could do with my family.  Often, partners get involved in some capacity, supporting the team on the bench, or officiating; but it is difficult to involve children.  I carried on with skiing, and led 7 or 8 groups to Sweden with the Backup Trust, but this was only one week a year, so I wanted to find something that I could do regularly.  Skiing was potentially something that we could have enjoyed as a family, but Amanda hadn’t taken to the sport before my accident; so having had one broken neck in the family I think had made her more risk adverse.  Its still something that I would love to do with Zoe, but at the moment she seems to have similar fears, and no interest in doing it.

I had tried various other sports, mainly unsuccessfully, but in 2005/6 I discovered sailing.  This is something that I could potentially do with my family!  Next blog I’ll explain how this works, and that it’s not as crazy as it sounds.  This is what has helped me to overcome adversity, to rebuild my confidence, and to give me a sense of purpose.