I altered my profile to include information about my condition.  To my amazement this didn’t seem to put people off; in fact I think that I had more interest by taking this approach.

My profile didn’t focus on my disability because I didn’t want it to define me.  I posted a picture of me in my chair, and in a matter-of-fact way I said that I was in a chair, but that it didn’t stop me enjoying life.  Because the information was there, it didn’t often come up in initial email conversations.  Often conversations focused on what I did; most people were fascinated by me sailing, playing rugby, and skiing.  Another strength seemed to be my ability to spell, construct sentences, be humorous, and to have normal dialogue without demanding pictures of various body parts. Apparently this was the experience that many women had encountered with many other men.  So that I was sure that meeting somebody wasn’t going to be a complete waste of time, I would bring up “the elephant in the room”; just to gauge whether people had given this any thought, and whether it was going to be an issue.  I don’t think that anybody really knew, or understood all the implications of getting involved with me, but at least I had sown the seed in their minds that it wouldn’t be that straightforward.

Emailing or messaging people gives you an idea of what they are like; their sense of humour, interests, and attitudes. Talking on the phone for some reason is quite nerve wracking initially, but this does give you a much better idea of how easy somebody is to talk to, and how interesting the person is; much more than messaging does.  It’s easy to write something funny with time to think.  Typically before I met anybody there would be some conversation about what I could and couldn’t do for myself.  To an extent the activities that I take part in masks, to a certain extent, the medical and personal support that I need to make those things happen, and for everyday living.  Whether it was curiosity, naivety, my banter, or something else, several people actually wanted to meet. I have to admit I was pleasantly surprised! 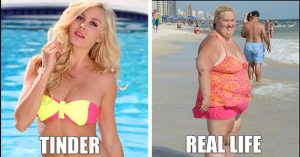 So the next hurdle was meeting up.  As I said previously, I’d usually go to a coffee shop for an initial meeting.  I’d get there early so that I was in situ and wouldn’t need much help.  There were a few times where the person who arrived bore very little resemblance to the pictures in the profile.  So while I’d been honest, I think some people had taken the creative license a bit further than is reasonable; either 10 years older, or twice the size.  Not that it should make that much of a difference, but it’s a bit of a shock. At least I’d been honest from the start!  Of course you’re not going to feel attracted to everyone you meet, so some went on to second dates and some didn’t.  I actually admired the honesty of a few people who said that they loved my personality, but that they didn’t feel they could take on the whole disability thing.  They were more honest than I had been with some of the people I met, who looked amazing but were boring as hell. 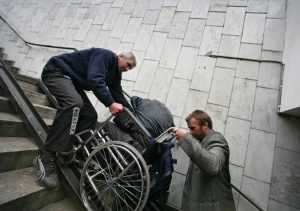 There were several people who I dated a few times, and I had to drip feed information about what help I needed.  For example, going out for a meal.  If I met them there I’d have to explain the presence of a carer, and how they are with me 24/7.  On the occasions when the date took me out, it would be obvious to them how many obstacles are in the way in everyday life: getting in/out of a car, getting up small steps or drop kerbs, cobbles or pot holes, narrow doorways, going to the toilet; things that most people take for granted.  Things have to be much better pre planned, and can’t just be spontaneous; I think this definitely takes the sparkle off dating. At least it did for me because I became more aware of things that I had taken for granted and had normalised.  Then of course there is the choice of meal. With no hand function ribs are off the menu, and anything that involves cutting reveals another piece of information about me; I’ll always need someone to cut up my food.  Although most people didn’t seem fazed by this, I was embarrassed by having to ask. 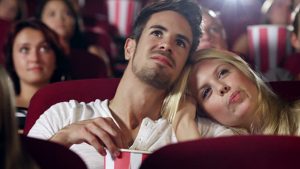 As relationships move on, and surprisingly some did, it becomes harder to think of things that I could do as a couple.  Going to the cinema isn’t quite the same; instead of snuggling up in cinema seats, wheelchair users are placed in an area in the middle of the theatre, 2 feet away from anybody, and 3 feet higher.  Also I get fidgety and spasm builds up if I sit still too long.  This results in my legs flying everywhere when I eventually move.  Going for a nice walk isn’t quite the same either; I can’t push my chair and hold hands at the same time. Also not being able to hold hands, or even feel my hands, detracts from the experience.  Even visiting new places can be challenging; unless I am chaperoned by a carer, the person I was with would have to learn how to get me in and out of the car, be briefed on emergency medication, and learn how to empty my leg bag.  Even staying in is weird when you have live-in care. Some carers are more discreet than others, but it is quite a difficult dynamic to get your head round.

My faith in humanity was restored by several people who did embrace all these obstacles.  I had some good times dating again, and met some lovely, genuine, and fun people.  It was a bit of an emotional roller coaster time of my life, coinciding with a battle for care funding.  I also had so much going on in my life with rugby and sailing, so anybody that I got involved with would have to be involved in these in some way, because they give me enjoyment and fulfilment in life.  I took a break from dating for a while, concentrating on the Paralympic dream of sailing.  By 2012 I realised that realistically I would not be able to challenge for a place in GB sailing, and I decided to sell my boat.  It was costing a lot of money, but I would need to spend much, much more to be competitive.  After this I decided to take another look into dating.

This is when I found the one ……  Yes, finally I’ve got on to meeting Nicky – Read the next blog