Friday 27th November; my life changed forever.  It started as your average Friday.  David’s carer came in at 8am to get him up and I went off to the gym.  Nothing unusual.  I came back from the gym and spent 4 hours on the phone trying to get tickets for the Coldplay concert at Wembley….you have NO idea how hard this is!  So when tickets for a concert or event become available, the average human can faff about online and book tickets.  Not so when you have to find and book accessible tickets for a wheelchair user!  They don’t become available online, so you have to call a “dedicated line” over and over and over and over again.  And when you (4 hours later) get to speak to someone, you then have to prove the necessity for a wheelchair space with paperwork!  Anyway, I eventually came screeching down the stairs with tickets for Coldplay booked.  I was delirious!

The rest of the day passed by, we had booked a table for dinner that evening at our beloved restaurant Le Beaujolais.  Nothing unusual.  We wandered into town and went for a pre-dinner drink at a bar near the restaurant.  Nothing unusual.  David was out of sorts; he said he had a banging headache and to be honest, he didn’t look great!  It was hammering down with rain; big torrential, wet, drippy, hair-ruining rain.  We shot along the street to the restaurant and were seated at “our” table, dripping wet and himself still somewhat ‘not quite with it’.  We ordered our usual sharing Camenbert to start, wine, mussels for me, steak for him as our mains.  Unusually we ordered pudding too and shared delicious profiteroles, full of oozey cream and smothered in rich chocolate sauce.  And then David asked for the bill, and Kiean, the owner and chef came over himself and plonked a little turquoise box on the table instead of the bill.

“So,” said himself.  “Open it.”  And so I untied the soft white satin ribbon, and pulled put a little envelope.  I looked at him, perplexed.  Confused even!  Inside was a little card, and it bore four perfect, magical, life changing words: Will You Marry Me?  I looked at him, perplexed.  Confused even!  And then he smiled and asked me “Will you marry me?  Open the box!”.  And so open the box, I did.  Inside was the most beautiful, delicate twisted rope of vine leaves, bound into a ring shape.  I lifted it from it’s Tiffany cushion and wept like a mad woman.  He was sat there grinning at me, tears in his eyes, waiting for an answer.  To be honest, half the bloody restaurant were craning their necks and waiting for the answer too!  I was far too busy, holding this beautiful ring on my finger and crying to do anything sensible like actually reply!  Of course I said yes, I cried buckets and as if by magic, champagne flutes were delivered into our hands and everyone around us was cheers-ing our amazing news. 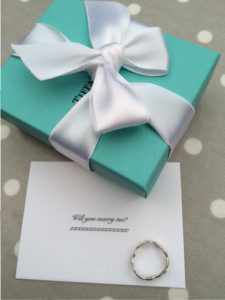 We sat there for a while; me still crying like a demented fool, sipping champagne and revelling in the happiness.  One of the waitresses took pictures on my phone; I panicked about the state of my rain soaked hair and lack of eyeliner on such a momentous occasion.  And then the “wedding-planning-demonic-Nicky” went into full on organisation mode.  It wasn’t pretty.

“Right then,” I demanded “outside, start phoning people.  First priorities, you need to ask my mother and brother for their permission.  Also Zoe.  Also your parents.  And then we need to book a date and a photographer and a venue and I need dress fittings and a tiara and a veil and shoes and you need a suit and then we’ll need a band and a fabulous honeymoon and a wedding list and a florist and a stationery person (wait…I can do that bit!) and bridesmaids and best men and ushers and a wedding planner and a magician and a firework display and an owl to deliver the rings and a partridge in a pear tree!!”.  David will tell you I went into wedding overdrive.  I think, that given the circumstances and the enormity of the event, that I was quite calm and reasonable!

I woke up the next morning with the smile still glued to my face.  We were talking about finding me a proper engagement ring, we were thinking about dates, I was texting friends with the wonderful news, and then our little bubble of happiness burst.

Something was very wrong with David, his colour was changing too fast and his body was shaking with uncontrollable, violent spasms.  I tried all the usual tricks.  I gave him medication.  But nothing worked; a sure sign that something, somewhere is wrong.  We managed to get hold of a Doctor by phone and an ambulance was sent to us; I followed in the car demented with worry until managed to find him in the A&E unit.  This was not supposed to be happening!  We hadn’t been engaged for even 24 hours and here we were in Swindon bloody hospital with a life threatening condition.  Fantastic!

I won’t bore you with the riveting excitement of 2 days spent in the critical care unit.  I eventually went home to sleep for a few hours and returned to find him apoplectic with rage having been woken by a Dr for a consultation at 2.30am and then having to listen to the rantings of a mad woman across the hall.  He seemed to be enormously excited about the bagful of wedding magazines I had brought along; or it might have been drug induced euphoria…who knows!?  He was plugged into a drip for the day so I kept his spirits up with a stream of incessant chatter about dresses, flowers, cakes, shoes, venues and honeymoon locations.  By lunchtime I had pages of lists and David’s eyes had glazed over; again, I’m pretty sure this was the medication.  By the time they discharged him, we had a list of venues to consider and had managed to find two weekends in the next 12 months that we were actually free! 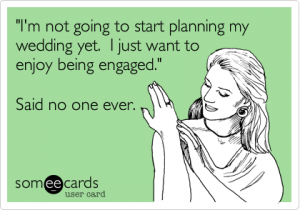 And then I realised that this wouldn’t be straightforward!  First off, we needed to find a venue which would be accessible to us and a number of our disabled friends.  It needed to have lots of bedrooms, many of which would need to be accessible.  It had to be easy for David to get around; forget the country house venues with acres of gravel outside.  Or the charming old buildings with narrow doorways and sweeping staircases!  My dream of a quaint Cotswold village wedding with a walled rose garden (for the photos of course!) were quashed.  Having worked in the wedding industry for over 10 years, I had a lot of knowledge and luckily knew most of the local venues pretty well.  So once I had accepted that the sweeping staircases and sun drenched cornfields of Gloucestershire were not going to figure prominently in our wedding photos, I started researching several realistic venues that would meet our requirements.  Several days later, we visited the Four Pillars Hotel in the Cotswold Water Park and within hours, we had paid a deposit and I was able to set a countdown clock on my phone….319 days to go!

Time has flown by, as I write this, my countdown clock is telling me that in exactly 48 sleeps, I will be married.  I never thought I would be saying those words.  I’ve watched most of my girlfriends glide down the aisle on their Father’s arm, and wrestled with bridesmaids to catch the bouquet.  I’ve worked with hundreds of brides over the years, and shared in their excitement and glee as they planned their dream day.  I’ve mentally chosen my dress, my hairstyle, my shoes a million times over.  But now it’s real; my time has finally arrived and I’m more excited than it is reasonable for a girl to be about a wedding!  I’ll be the happiest, bubbliest bride you will ever see.  I’m going to glide down the aisle (in my sparkly princess shoes) on my brother’s arm, and marry the most wonderful man.  I literally cannot wait!  In reality, I’m probably be hobbling down the aisle in my impossibly-high-and-ludicrously-uncomfortable pointy shoes, wishing I had gone to bed earlier and drunk less champagne the night before.  I’ll probably have cried at least 3 times before the service, so I’ll be a bit puffy and shiny.  Chances of me falling over, tripping on my dress, fluffing my vows or sobbing are high.  If you were a betting man, I’d strongly suggest sticking a tenner on ‘odds of Nicky bawling her eyes out on wedding day’.  Could be a wise move! 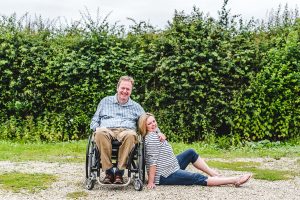 We never did find out the cause of David’s uncontrollable spasms.  I choose to think it was excitement after the proposal!  He chooses to think it was his body going into shock at the reality of letting me loose on wedding planning and the possibility of me making him bankrupt within hours.  I keep telling him that my recently acquired Jimmy Choo shoes are an investment!  He’s always telling me how important investments are…

And whilst I am deeply in love with the very shiny shoes, I think the best investment I ever made was a subscription to Match.com and the bottle of Pinot Grigio that gave me the courage to send a wink to a nice looking bloke that Saturday night.  48 sleeps….one thousand and something hours…