The Sun Always Shines on TV

Better late than never – things get super hectic when you get married apparently!  Anyway, here I am again, with more ramblings about life with a grumpy tetraplegic and mutterings about marriage.  I mentioned in my last blog about the TV company that had approached us about filming the wedding…..well, here’s the story about that episode of our life!

One morning in May last year, a film crew arrived on our doorstep!  There was a camera man, a sound man, Charlotte the producer and her assistant.  It was hugely exciting and warranted HOURS trying to do make up that made me look like I wasn’t wearing make-up.

We had already discussed aspects of our lives that they wanted to film, and we threw ourselves right in at the deep end with a day of filming interviews and our life ‘at home’.  Part of this involved me helping to get David from his wheelchair into the armchair; of course, I had to do the transfer properly and not ‘fling’ him around as I usually do when I’m not being filmed for a prime-time ITV show!  It’s never quite as easy when you have a bank of people watching your every move; I ended up having to do the same transfer about 5 times until I actually got it right.

The film crew came and went over the summer; they filmed all sorts of things (sadly not everything made it into the program) and we had great fun watching them transform the car with cameras on the bonnet and wrapping the front of our house in foil (to get the light right!) leaving our neighbours to think we were operating a meth lab in the middle of the Cotswolds.  They were lovely, kind, funny people to work with and we loved being filmed; they even came out on a boat to film David sailing whilst using Go-Pro cameras attached to his dinghy to get the real action shots.  They filmed him playing wheelchair rugby with his able-bodied friends and footage of me working on our wedding stationery and busily writing another blog. 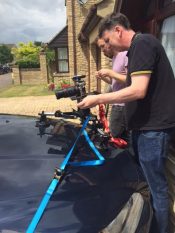 They also followed us around while we did our pre-wedding-photo-shoot with our wonderful photographer; Marcus.  We started off doing some casual shots at our sailing club and once over the nerves, we eventually began to relax and enjoy ourselves.  Marcus needed to get used to us; after all he was going to be an enormously important part of our big day.  He needed to understand what David could do and how the wheelchair would become part of our precious wedding photographs.  From our point of view we wanted to see how we would look sat down together, or me draped over him, or sat on his lap – lots to consider!  This was our one chance to practise before the wedding day; I know how much wedding photographers love their quirky shots of couples in trees, hanging off 5 bar gates or looking dreamy in sun drenched cornfields.  Not us, sorry!  We denied Marcus of a normal day out and instead we discovered the benefits of a)posing like a flamingo b)a giant hedge as a backdrop c)the amazing array of fabulous doorways in Cirencester and having your pre-wedding-photo-shoot being filmed by an ITV film crew.  It was simply awesome; we laughed all day long and were giddy with excitement when we saw some of the stunning images later that evening. 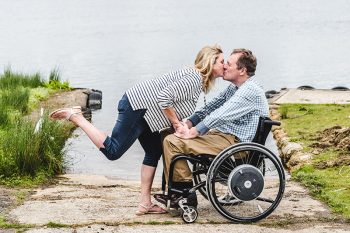 One of the most fun days was filming David driving; (didn’t make it in the program unfortunately) we had to get in and out of the car in between dodging torrential rain and standing around with umbrellas sheltering cameras.  Three of my girlfriends arrived that afternoon and basically made nuisances of themselves chatting up the sound man (he was nothing short of DELICIOUS!) and being noisy in the background.  Eventually they were banished to the spare bedroom where they somehow managed to consume most of a bottle of gin whilst planning the demise of the sound man’s dignity.  That evening we were being filmed having a ‘girly chat’ in a bar in town; the combination of gin, too much giggling, an extremely good looking young sound man and prosecco rendered us all useless!  Charlotte got some great footage that night; absolutely none of it could be used in the program, but somewhere in the vaults of tv-land is film of a tale I told which NEVER EVER EVER needs to see the light of day! 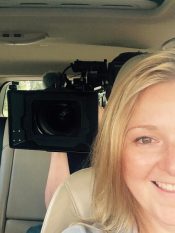 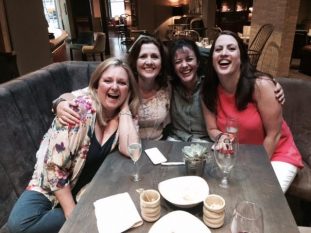 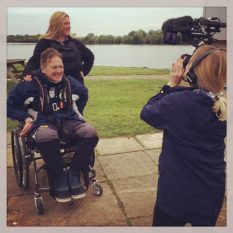 The next day was the filming of David having a fitting for his new dinner jacket at Brocks in Cirencester.  Now, if you have any kind of idea about life in a wheelchair, you will know that your average off the peg suit does not work quite so well when you spend your entire life sitting down.  So Brocks came to our rescue with a bespoke tailor made tuxedo – and just like everything else in life with a tetraplegic, trying it on isn’t straightforward.  I had to collect the suit from the tailors, dress David in it (being VERY careful!) the next morning and then drive into town (transferring in and out of the car…being VERY careful) so that the tailors could work their magic and make the adjustments to the trouser length, the fit of the jacket and the way that it was cut so as not to get tangled up in his wheels.  It looked incredible, I cried looking at my gorgeous fiancé; he looked better than James Bond – with the added bonus of wheels.  Once the suit was fitted to perfection, we changed his shirt (different scenes, different clothes – you get used to it!) and went to film at Le Beaujolais, the restaurant where we had our first date and where David proposed to me.  We were fed steak and chips, given champagne and reminisced about the first time we’d been there and all the subsequent special occasions that we’d spent in the lovely French restaurant.

Once full of food and fizz, we had to get back in the car (still being ultra-careful of the tux trousers), shoot back home and get David back onto the bed to get changed into gym kit.  Back in the car (not quite as carefully) down to the gym, out of the car where the film crew were waiting for us to do a gym workout. 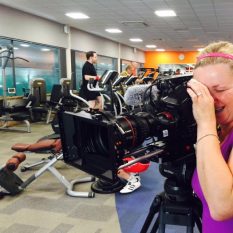 Good, a filming session in the gym!  My idea of hell!  Plus add into this that I had a fairly monstrous hangover, thanks to the gin/prosecco/sound man/giggling of the night before.  Plus add in the steak and chips AND champagne we had just consumed.  Plus 5 car transfers, 2 changes of clothes…..I was not looking my best!  It took all of 47 seconds for me to work up a genuine sweat on the cross trainer, the red face and panting were entirely caused by exertion and NOTHING to do with the food and drink that was coursing through my system!  David managed far better than I did and even managed to crack a few jokes whilst he worked on weights and the hand cycle.  They got the footage they wanted and we eventually “wrapped” (I learnt all the jazzy-tv-lingo!) for the day.

As the big day approached, we liaised closely with the production team about what they wanted to film and how they would seamlessly disappear into the background without being noticed by 160 wedding guests.  I was in spreadsheet heaven making the final arrangements and getting the timings of the day down to military precision.  The rest of the filming would be the wedding itself, so we had a few weeks without our lovely film crew in the run up to the actual day!  It was strange – we almost missed them!  And whenever anything funny (worthy of ‘You’ve Been Framed’) happened, we collapsed into giggles and told anyone within a 5 mile radius that it was such a shame OUR film crew weren’t with us.  I gave myself a reality check – this was about US and OUR wedding after all.

The filming days were often hard work; early starts and quite a lot to fit into a day to give them as much footage as possible.  In hindsight, I think they had enough on us to make a series!  People in the editing suite must have been sick of us!  Early in September we were at a sailing event in the wilds of Derbyshire; stupid o’clock one Saturday morning and I was rigging David’s boat ready for him to float around in absolutely NO wind whatsoever.  When I returned from the pontoon David was hooting with laughter having been approached by someone who had recognised him…the program wasn’t even finished; yet Lord Durston had already managed to captivate the glance of some poor sod who happened to be sailing at Carsington Water that weekend.  Said chap had been working on the edit of the program, getting it ready for the wedding scenes to be added it and recognised David from the footage he had seen – very bizarre!  I began to wonder what impact ‘Extraordinary Weddings’ would have on our lives….time would tell!