Getting back up: Finding something 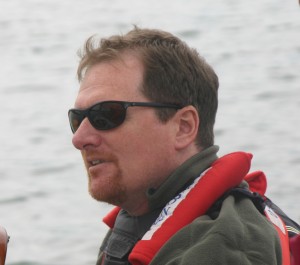 Why would somebody who is paralysed, who can’t control their temperature, who broke their neck in water, and who floats the wrong way up; even consider sailing as a hobby or sport?

My beginnings into the world of sailing weren’t brilliant. The first time after my accident I was sat on a sawn down patio chair, gaffer taped to the side of a boat called a Lugger. There was nothing I could do except sit there, enjoy the view, and to try not to worry about tipping backwards into the lake, or falling face first into the bottom of the boat.  The second attempt was in the river Dart in an a Hansa 303.  These boats are specifically designed for sailing by disabled people, and have a variety of options to enable people with even the most profound disabilities to sail.  Unfortunately, the boat I was in did not have these features.  My hips were too wide for conventional steering, so the helpers removed the tiller stick (for steering) and installed a joystick control.  This is usually brilliant, but without the tiller stick as a visual aid, there was no way of knowing which way the rudder was pointing.  This resulted in me going round in circles in the middle of the Dart estuary, falling on top of my co-pilot when we went one way, and with my head under water when we turned the other way.  To compound the problems, a massive naval ship was bearing down on us sounding her horn.  This did focus our attention and we got out of the way!

There were a few other experiences that I had which would have put off most people from pursuing sailing, and I had almost given up, until I was given the opportunity to go on a week sailing with the Backup Trust.  I promise I’m not on commission for Backup, but I can see how my ravings could be construed in that way.  Actually, I did have serious reservations about going on this trip.  My perception of sailing was that there was a lot of work involved, it’s cold and wet, that it’s a bit boring, but can be a bit scary, and that it’s really expensive.  I decided that I would do the week at the Calvert Trust in Keswick.  I’m not sure what led to this decision, desperation to find a way that I could do it, or just to get away from being at home and dependent on care, or to take the pressure off Amanda.

Whatever the reason, I went.  The first thing we did after putting our bags in the room was to go to the swimming pool.  The intention of this session was to reassure us that in the event of a capsize, or falling out, that the life jackets would turn us over to our backs, and we would be rescued.  I was fitted with a life jacket and sat on the side of the pool, ready to fall in. There were volunteers and instructors all around.  I fell in, turned onto my front, and couldn’t do anything to turn myself over.  “That’s not supposed to happen” the instructor said.  They then tried a different jacket on me and tried again. The result was the same.  Not the reassurance that they, or I, had hoped for.  We did find one that worked (Crewsaver 275N) thankfully.  I have since done more pool tests on life jackets, and alarmingly this jacket was the only one out of 6 tried, which did turn me over.

Bassenthwaite lake, the only lake in the Lake District (a good pub quiz question), is beautiful. We were blessed with beautiful weather, and fortunately, not too much wind.  The instructor there, really understood what I could and couldn’t do.  Immediately, I was hoisted into a Challenger; a trimaran design which stays quite level at all times.  I was strapped into the seat with a quick release belt, and then there was the realisation that my hands could not grip the rope to control the sail.  Nick the instructor, darted off and came back with a sawn off bit of tube with a V cut in it, and some gaffer tape.  The tube was placed in the palm of my hand, my fingers wrapped round it, and then gaffer taped in place.  Once the main sheet was run through the tube I was able to catch the rope in the V, and pull the sail in; the tiller I could control manually.  It was amazing, I was out on the lake sailing independently; no one around me.  Since my accident I had always had carers, Amanda, or someone around me most of the time.  Here I was free, and could just enjoy the scenery, the sun, the water, and I was in control.

During the week there were times when the wind picked up a little bit, and it was easy to see that I was not able to manage the boat then, but it was a start.  On the last day we had a mini race.  I was by far the most disabled person in the group, and all the support team got into boats too.  The races were just a bit of fun, but I am naturally competitive and won.  This made me think that I might have a bit of an aptitude for sailing, and that I could potentially have found a sport that I could do alongside able bodied people.  As soon as I came home I searched for a local club where they offered Sailability.  I discovered Whitefriars Sailing Club, just 5 miles from home.  They had the same equipment that I had tried in Keswick, but they had also borrowed a new dinghy with a motor and joystick control for the sails.  It had high sides and a supportive seat.  The Chairman of the group was also involved with the national Hansa Class, and was keen for me to get involved in their regatta season.  There was one held at Whitefriars, and I had a go.  It was a very windy day, and the electric motors weren’t working properly.  I managed to start the race, but soon lost control and careered across the course, my head dangerously close to the water. Amanda and Zoe had come to watch, and were screaming on the shore.  Unfortunately, I think that this was the last time Amanda came to see me sail; having watched me almost drown when I broke my neck, I suppose this is understandable.

Undeterred, we worked on the equipment that I was using, and found ways of making it better for me. I started to get involved in races at other clubs, and was quite successful.  Within 18 months one of the GB coaches thought that I should try a boat that was probably going to be the next Paralympic boat, the Martin 16.  This gave me an opportunity to race alongside more serious, experienced sailors; and to use a spinnaker sail.  I learnt a lot about racing and the technicalities of sailing from this.  The Martin was not chosen as the Paralympic boat, the SKUD 18 was.  Unfortunately, these are too big to be sailed at Whitefriars; the only club that had any was Rutland Sailing Club, which was 2 and a half hours away.  I was keen to try to get to the Paralympics, but there was no funding available until you proved that you were in the top 5 in the world.  In order to do this, you needed to go to events around the world and get results.  Obviously transporting an 18ft boat is not cheap, and while it is travelling, a second boat is needed for training.  New, these boats cost £25k, and on top of that you need to cover the costs of a coach and a support boat, as well as a carer.  I had one shot at this by borrowing a boat and fund raising.  We went to Rochester on Lake Ontario in the USA for the World Championships.  The GB coach found me a crew, Rachel Morris, who was brilliant, but neither of us had much experience in this type of boat.  Actually, we did surprisingly well, finishing 13th out of 18.

After this I had to make some tough decisions.  If I was going to be competitive at this level, it was going to take some serious commitment of time, and money.  I loved my family, and didn’t want to miss out on Zoe growing up.  I could carry on with sailing locally, but decided to just dabble with the SKUD 18, looking to improve and hoping for the right opportunities.  At this time, I did get Zoe involved with sailing through the junior group at the club, and she came along to a few Sailability sessions.  This was fantastic, finally I had found something I could enjoy with my daughter.  She seemed to enjoy being in the water more than being on it.  Unfortunately, she didn’t really enjoy the actual sailing, which I found a real shame after finally finding something we could do together; still c’est la vie.

What is fantastic about sailing is that the boats are an equaliser. The type of boat I sail means that you have to stay seated in the middle.  I have a special motor for the sails because I can’t hold the ropes, but I can manage the steering.  So, provided the electrics work, I can compete alongside able bodied people in the same boat, and be competitive.  In fact I came 2nd in the European Championships last year, and 1st in the Nationals against people with much less severe disabilities.  Also in sailing, each type of boat is given a speed rating, so it is possible to compete against other classes of boat, come last, and win.  This changes everything because I can now compete alongside everybody else in club races.  Finally I have found a way to be involved regularly in an activity local to me; this has made a big difference to my life.

My involvement with sailing really boosted my confidence, and enjoyment of life.  It really helped me through the next chapter of what turned out to be the most difficult time for me.  I think it’s important to have something you enjoy in life, whether it’s music, painting, reading, sport, whatever.  Then when personal relationships breakdown, there is still something left.

The next blog will be hard to write, but then we’re into the good bits.  Life can’t always be perfect.