Well it started off quite promisingly.  After 9 years of not driving, I had had my car adapted with hand controls, and had the steering lightened.  It’s quite scary that there is no need to retake a driving test, all you need to do is get the car adapted. I did go to MAVIS to get assessed for my ability to drive, and to find out what I needed to do to the car.  For years I hadn’t had the confidence, and I couldn’t really see the point of spending all that money adapting a car when I would always need somebody with me to get me in and out of the car, and just to be there in case I suffered an episode of Autonomic Dysreflexia, or spasms.  Actually, it was worth it.  It felt like another thing that I could do to help.  I was so dependent on carers, or Amanda, for nearly every aspect of everyday living, that to drive meant that I could actually give them a break for that time.  Also it was unreasonable to expect others to tow a boat, so if I wanted to compete elsewhere, I had to be able to tow.  There was also one carer who asked me, “so remind me, which one is the brake?”.  This was the clincher in my urgency to drive. 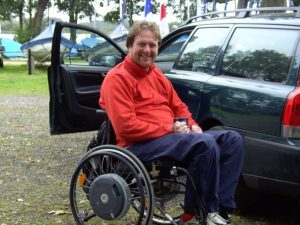 Steering developments adapted the car for me.  We got it back home and got me into the driver’s seat.  I had a very slow, tentative drive around the cul-de-sac with a carer, and felt very nervous.  We took to the back roads, and I soon realised that even with the steering lightened, I could not turn the wheel all the way round, it stopped at the top because my arm was too weak to get past that point.  This led to a scary drive round the Cotswold Water Parks because I needed a long gradual turning area.  At one set of crossroads I had to make the decision to go straight across, instead of the intended left turn, because of a massive lorry coming from the left.  This would have ended very badly. We did get home somehow, and I was nearly in tears. I’d spent all this money adapting the car, and I couldn’t even drive it properly.

I contacted Steering Developments who were brilliant.  We took the car back and showed them the problem on a disused airfield.  They lightened the steering further.  We tested it out again on the airfield, and I could do it. Once we got home, I practiced on a few short drives.  After a couple of weeks I went to a wheelchair rugby tournament in Birmingham and decided to try out the motorway on the way home.  Because my hands don’t work, I have to wear a glove with a pin that goes into a socket on the steering wheel.  The socket had been placed at about 4 o’clock, which meant that I had to hold my arm in that fixed position for the entire journey. After about half an hour I realised that my arm had gone completely dead, and I could not steer at all.  Fortunately we were on a motorway, and were close to a service station.  I calmly explained the situation to my carer, and suggested that I control the speed with the hand controls, and that she should lean across and steer the car into the car park.  We made it, and obviously swapped over drivers.  A simple move of the socket to 6 o’clock on the steering wheel remedied the problem for the future.  That particular carer left shortly afterwards.

That Christmas we had an amazing family holiday planned.  It had been my 40th, Amanda’s 40th, and our 10th wedding anniversary all within an 8 month period.  We decided to really go to town and go on a Disney cruise around the Caribbean, followed by a few days in Disney World, Orlando.  The cruise was spectacular.  The suite was massive because the disabled rooms have more space, and we had a fantastic balcony.  The ship was all quite accessible and I could get about by myself because I’d bought some e-motion, power assisted wheels.  One problem was that I couldn’t get off at many of the ports, but Zoe and Amanda could go off and do the activities, while I stayed on board and either read, or did on board activities like wine tasting.  The food was excellent.  Another issue was that the restaurants required a dress code, and for me to get back onto the bed and Amanda to undress and dress me again, was a lengthy and tiring process.  I think this was when I started to realise something was wrong because she wouldn’t do it, and I ended up going to a black tie dinner in a sports vest, and felt very awkward and self conscious. 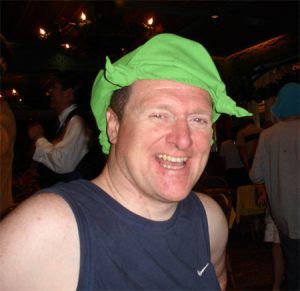 Things got difficult when we got to Orlando because the accessible room that I had booked was not accessible.  I think it had a step to get in, and an incredibly high bed that was impossible for Amanda to transfer me into.  We spent several hours arguing with the hotel staff about the situation, which wasn’t ideal after a long journey; not helped by a fractious 9 year old who was excited by the idea of meeting Mickey Mouse.  They did eventually find us a suitable room in a sister hotel, and we moved over there.  We were in Disney for New Year’s Eve, and I really wanted to stay up and enjoy the fireworks.  Disney has the most spectacular fireworks in the world, and we were here in Florida, surely we had to see them.  But I think the job of looking after me, a 9 year old, and travelling had taken its toll, and Amanda was too tired, so we were in bed by 10. 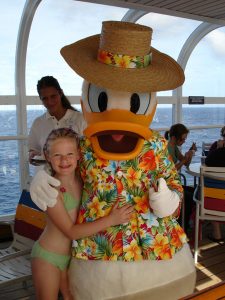 The journey home was problematic too.  I need lifting into a plane seat, which requires 2 well trained, strong, tall people. I’m 6’2” and about 14 stone, so when they sent a 4’6” woman by herself, I had to admire her optimism that she could lift me over.  Of course she couldn’t, and we ended up with Amanda and a helpful passenger lifting me over.  This isn’t a one off situation; nearly every time I have flown I have been faced with people who can’t speak English, are untrained, and are incapable of doing their job. Not only does this put their backs at risk, and my shoulders at risk, but it’s pretty undignified getting hauled about in front of a crowded plane full of people who are annoyed that the flight is delayed because we had to wait for the useless, physically challenged, moving and handling “expert”.

We got back into the routine back at home.  I had recognised that we didn’t have any shared interests; I was doing my rugby, sailing, and Backup Trust activities; and Amanda was playing tennis and running.  We didn’t go out very much together, and spent most evenings in front of the TV.  It was hard to find things that we could do together because the options available to me are so limited.  Also I got the impression that she didn’t have much enthusiasm to find something.

I think that the start of the end was in March/Feb 2009. I had driven home from an Open University tutorial with my carer.  I swung unto the drive a little bit faster than usual because I was getting more confident. The harness that I wore to keep me upright was a bit loose, and I fell sideways.  Because my tricep doesn’t work, I couldn’t get enough pressure on the brake. The car hit the font of the house, which used to be a garage, but had been adapted 10 years earlier when I had my accident.  The impact was slow, leaving only a 1” crack on the number plate.  However, the wall cracked all the way along the front, the window broke, and the damage extended round to the front door.  Amanda came out and shouted “what the **** did you do that for?”; like I’d planned it.  For some reason the accident seems to have made me more emotional, and I couldn’t help but blub. It cost £12k to rebuild the house, and we spent over a month in a bedroom with a tarpaulin sheet for a wall, and a halogen heater.  Not a great winter.

In September I group led a Backup trip to Keswick, sailing.  When I got home I felt that something had changed, but it still came as a complete shock when Amanda came home from work a few days later and said that she couldn’t do this any more, and was leaving.  We had been good friends, and lovers since the age of 20.  What made it especially hard was the reasons.  I had started to feel confident again, and I felt that despite obvious difficulties it was still possible to do so many things, it just takes a bit more planning and work.  Amanda said that she had fallen out of love with me, and felt that she would grow to resent me for preventing her from doing things.  I suppose that people do just grow apart and fall out of love, but I felt that Amanda had never really adapted to living with somebody with a disability and everything that it entails, despite trying hard for 10 years.  When you look at it, she had married a healthy, independent, 6’2” hunk (creative license), and now I was largely dependent on her, and doing anything lacked spontaneity and was a lot of work.  As a result we didn’t do much together, but ironically I was getting out and doing far more than most able bodied people, it just wasn’t things that Amanda wanted to do.  We remain friends and still care for each other, and unfortunately for Zoe we still talk about her and know when she’s trying it on.

Obviously, just leaving isn’t that easy, because I was dependent on her for most of my care.  I was very grateful that she stayed for 3 months while we worked out with Social Services how my care needs would be met, and I attempted to change her mind, but to no avail. In January she left, and I was left in the house with 24 hour care provided by an agency.  We agreed that Zoe would stay with me 2 nights a week, and alternate weekends.  I felt like I would never find anybody again who would love me, and who would be prepared to take on all the work, and difficulties that living with somebody who is paralysed entails.

To me it felt like life had ended at 40!