Just like anyone else, we love going away: fancy hotels with glitzy restaurants, romantic evenings watching sunsets on the beach, breakfast in bed and a shower big enough to Zumba in? Yup, all that and more!

But the reality is that going away for us, is considerably more complicated.  At home we have everything we need; hoists for transferring David, a table that is the right height for him to sit and eat at, a bed that he can get in and out of, and nice smooth floors that he can push around on without getting stuck every few minutes! 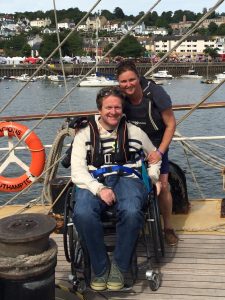 We also have a wet room so that he can shower and perform his ablutions in relative peace (although cats have learnt to open the bathroom door) and a host of other equipment that makes life easier for him and me.  When we go away we have none of those things.  Unfortunately, there are no hotels that can satisfy the needs of everyone; and whilst the big chains like Premier Inn etc do make a huge effort to make everything accessible, it’s never going to be perfect for unlimited scenarios.

So we just manage.  We can’t take all the equipment with us everywhere, it’s just not practical.  It means he can’t have a shower, so we make do with bed baths and try and stick his head under a tap to wash his hair if he can even get into the bathroom.  Hotel beds are usually not the perfect height; too high or too low and it makes my job of getting him in and out pretty difficult.  When we go away with the rugby crowd, I can always rely on help from someone, but otherwise I’m stuck!  There was one hilarious incident when we were away on our own and trying to get him into bed.  Drink had been consumed and when he lent forward from his chair and put his weight onto the bed, we realised the damned thing was on wheels.  He descended quite gracefully to the floor.  Through a fog of gin and tonic, I was adamant that I could lift my 6’2 14 stone paralysed boyfriend high above my head and gently position him amongst fluffy hotel pillows.  Could I heck as like!!

I went down to the hotel bar; there was a couple of fit, strong looking lads knee deep in lager.  I’m not sure what they were expecting when I sidled up to them batting my eyelids and with my best helpless female expression, but “I’ve dropped my boyfriend, can you come and help us get to bed?” was almost certainly not it!  They kindly helped me and probably went back to Preston or wherever with tales of heroism and manliness, having saved the damsel in distress.

Then there’s the issue of dining out.  David can feed himself perfectly well, but he does need his food cutting up and finds some glasses and mugs impossible to use.  He just doesn’t have the dexterity; and if he can’t get close enough to the table (think about the legs, that base, the height) then the task becomes even harder.  If we make a dinner reservation, we always mention that he is a wheelchair user.  More than once we have arrived to find the table that has been chosen for us is up a few steps.  Those trendy booths or banquettes are a nightmare too!

Nothing is straightforward, but I firmly believe that nothing is impossible, it just takes a bit more planning.  Some buildings will never be accessible to him, and that’s sad because he misses out.  It was something we had to consider when we first started planning our wedding….most of the gorgeous Cotswold venues that I wistfully dreamt about are old and almost completely inaccessible to him.  Oh, and then there’s gravel….or cobbles.  Or gravelly cobbles and they’re just the work of the devil if you’re in a wheelchair!

We have had some amazing trips away and with armed with a bit of careful research, nothing has defeated us yet.  Flying is a giant pain in the rear, just getting into an airline seat is a challenge.  We arrived for an early morning flight to Barcelona to find the “mobility assistant” was of dwarf proportions and spoke a language only a mutant goblin would be able to get to grips with.  She wouldn’t listen to his advice and kept pulling his arm (the only thing supporting him) away from his wheel, causing him to fall forward each time.  I was not allowed to help (some insane H&S ruling) when actually I could have done the job in seconds because I am TRAINED to do so.  The entire plane was watching this debacle unfold, huffing and tutting that WE were delaying take off.  In reality, we should have boarded first so that David didn’t have to go through the indignity of some cockwomble trying to manhandle him into a bloody seat – we were at the gate an hour before boarding started to meet the unhelpful dwarf, but the second person required failed to materialise until the plane was entirely full of passengers.  I was apoplectic.  When we were eventually settled and my blood pressure was returning to something approaching normal, one of the stewards minced over and politely asked if we would care for a complimentary drink from the bar.  I could have kissed him.  The stuck up cow next to me was clearly horrified that she would be spending 2 hours next to a woman who found solace in a large gin at 8.20am.  Spend a day in my shoes love, and then give me that look!

Himself in Parc Guell, Barcelona

For the record, Barcelona was fab-u-lous and the most accessible city we’ve experienced.  Smooth pavements, easy drop kerbs, a brilliant hotel smack in the centre with great facilities (handily located next to an Irish bar!) and even the buses were equipped with ramps.  We went everywhere, my iPhone proudly reported we were walking and wheeling about 10 miles a day.  Mind you, we needed to-if only to counteract the endless food we seemed to eat!  We visited the incredible Sagrada Familia which reduced me to tears with its impossible beauty, and the fascinating museum in the crypt underneath.  Yes, it’s accessible but reached by a fairly steep slope.  David was adamant he could manage it, and seconds later was flat on his face on the floor having managed it a bit too fast.  Cue hordes of helpful Spaniards descending on us and carefully helping me to lift him back into his chair.  As hilarious as we can’t help find these incidents, they are a tiny bit scary too.  He wouldn’t know if, whilst falling,  he had cracked his knee or dislocated an ankle…and so we need to check him over to try and determine that everything is where it should be.  So far, so good; he’s still in one piece.

Wherever we go, don’t travel light; driving is easier just because I can pack the back of the Volvo up with ninja-esque precision and down to the last spare sock, I’ll know exactly what’s where.  I carry spare EVERYTHING.  Not just clothes and stuff for every eventuality, but we also have to think about situations that might arise while we’re away: so we take potions and lotions for all sorts of things that ‘might’ happen, various dressings for skin sores, all kinds of gadgetry to deal with bladders and bowels…oh and then there’s the inner tubes, Allen keys, screwdrivers and tools to fix the wheelchair.  You’ll often see me loaded up like a pack horse at a regatta with David’s kit.  Or at a wheelchair rugby game with even more kit.  Everywhere we go, David’s rucksack travels with us; emergency medication, his wallet, waterproof cape thingy, mug, spare inner tube, various tools, special bag for emptying wee bag into when we can’t find an accessible toilet; all sorts of bits that make life easier when we’re out of the house.   Once upon a time I had a handbag full of girl things like make up and hand cream.  These days I carry an adjustable spanner, duct tape, anti bac gel, pressure dressings and enough medication to admit me into rehab for serious painkiller addiction.

And whilst I’m not always brilliant at ‘boy’ things like fixing shelves or hammering a fence together (actually, I was quite good at that I discovered!) I’m pretty handy at Sherpa-like bag carrying, Volvo packing and lifting my face planted fiancé from various floors.  They may sound like little things to you, but they’re pretty important skills to have I’ve learnt!