We had been together just over 2 years.  Everything was going really well; so the more rational amongst you might ask the question: “Why rock the boat?”.  Why not just carry on living together happily?

I know how much getting married means to Nicky, and I love her very much. Although we do so much together, enjoy each other’s company, and seem inseparable; Nicky still has insecurities based on her previous experiences.  For some reason I’ll never understand, she can’t believe that I love her and want to be with her.  I wanted her to know that I do, and that I wanted to make that commitment.  Nicky has never been married, but through her business she has been involved in hundreds of weddings.  I know that she has dreamt of being the bride for years, but thought that it would never happen to her. 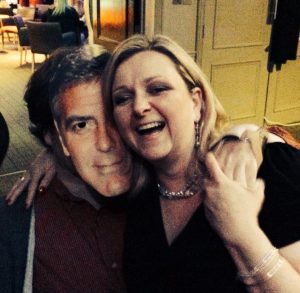 The proposal needed to be something really special.  I wanted to make it a total surprise, something really memorable.  To try to achieve this without involving anybody else was going to be difficult.  How could I get a ring, arrange a suitable occasion, and present the ring without her knowing anything about it?  Not to mention getting down on one knee, which I decided was going to be impossible.  And then it struck me; a brainwave.  Nicky was Secretary for Gloucester Wheelchair Rugby Club, and had just done an amazing job of organising a tournament in Cheltenham.  This gave me the idea of asking our contact at Gloucester rugby for a favour.  Being Welsh and loving rugby, Nicky of course is a bit of a fan of James Hook.  The idea I had was to get Hooky to come to one of our training sessions, and to surprise Nicky by presenting her with a shirt signed by the Gloucester players as a reward for her work organising the tournament.  She would think that that was the surprise, but then he’d drop to one knee, put on a mask of my face, and pull out a ring.  At this point I would ask the question with Hooky as my stunt double.  What a fantastic idea I thought!

First I had to buy a ring.  I didn’t know what size her fingers were, and I had no way of getting to her jewellery box. One morning Nicky had taken her rings off, and had left them on the sink in my bathroom. I had noted which one she wears on her ring finger on her right hand, and guessed that the size for her left hand would be pretty similar.  I managed to pick it up and get it onto my little finger, just below the knuckle.  I can’t get into shops by myself, and didn’t want anybody to know, not even my carer. This meant that I had no way of finding out what size ring I needed to buy.  A few weeks later I went to help Nicky at a wedding show at Cheltenham Racecourse. There was a jeweller there, and when Nicky had gone to the car to get more of her exhibition stock, I asked him if he could measure my finger.  I didn’t want to buy an expensive engagement ring without her being involved, because I’d probably get it wrong.  She loves Tiffany things, so I found a basic ring that she’d be able to use as a dress ring once she had the real thing.

We went to London in October to watch a Wheelchair Rugby tournament at the Copperbox, and stayed over to watch the quarter final game of the rugby World Cup between Wales and South Africa.   Being Welsh, Nicky was really looking forward to the game between Wales and South Africa.  Being English and magnanimous in defeat, I was happy to support our home nations.  Unfortunately, when we got to the gates of Twickenham, we were not allowed in.  The tickets, which we’d ordered a year earlier were for the Scotland v Australia game the next day.  How had I got this wrong? We were flying to Barcelona the next morning.  Amazingly Nicky stayed calm as we walked round to the ticket office to see if there was any possibility to change the ticket.  After what seemed an eternity, the wonderful person on the other side of the counter issued tickets for us, and we got in.  Nicky hardly mentioned this cock up on my part, and it’s hardly ever been brought up since…..

Anyway, I digress.  The point to this part of the story is that we met up with Mary, Nicky’s best friend in the evenings.  Having had a few drinks at the rugby, and in the pub afterwards, I was a vulnerable target for Mary’s interrogation.  She started: “So when are you going to make an honest woman of her then?”. Not wanting to ruin the surprise, I managed to just shrug it off.  But my resistance was low, and Mary was relentless in her questioning.  I let it slip that there was a plan in the pipeline, and now there was no escape.  I had to describe my cunning plan, thinking as I did, how brilliant it would be.  My excitement soon faded as Mary looked at me with a look that can only be described as total contempt.  I’m not sure of the exact words she used, but I do remember it not being entirely supportive on the plan.

Welsh Legends with us at the GRC Dinner!

In my mind, I now had some doubt that the idea was not quite as brilliant as I had thought.  Undeterred, and with limited options, I persevered. I contacted my contact at Gloucester Rugby, and asked if he could put Hooky in touch with me because I wanted to ask him a favour.  He came back to me to ask what it was, because he couldn’t really ask such a thing without knowing.  So, I had to tell him my plan.  I heard nothing for a while, and wondered what had happened.  When I saw Gary next I dropped it into conversation, and reality hit when he said: “To be honest, it’s a crap idea. Proposing should be something you do in private, and with just the two of you”.  OK, so now I had to accept that my genius plan may be flawed, and I had to think of an alternative.

We had a fantastic time together in Barcelona, and there were several times when I was tempted to propose.  I didn’t have the ring, and I thought that Nicky might be expecting it then, so I resisted.  When we got home I started to think again.  Then it struck me; Le Beaujolais!  We had been on our first date there, and all our special occasions since. I knew the owner, Kiean, from going there, and from the sailing club.  The plan then, was to take the ring to the restaurant in advance, explain to Kiean that I’d like the ring brought down in its box with the bill, and given to Nicky to open.  I phoned him in advance to explain all this, booked a table for Friday, and dropped the ring down to him after going to the gym on Wednesday.  What could possibly go wrong? 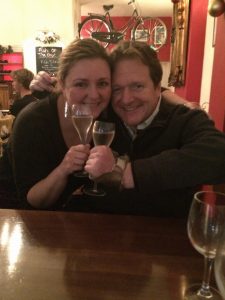 Friday came, and I really wasn’t feeling very well.  I don’t know whether it was nerves, excitement, or something physically wrong.  We went to Somewhere Else (that’s it’s name. It’s a wine bar) to have a drink before our meal.  I didn’t even enjoy my wine, and struggled to finish it.  On to the restaurant we went. The waitress took us to our usual table, and the scene was set; there was no going back now.  Not that I wanted to, I just wished that I felt better.  We had a beautiful meal as always, and the atmosphere was lovely.  We finished our food, and I asked for the bill.  Kiean came down as we’d planned, putting the turquoise Tiffany box in front of Nicky.  “What’s this she said?”.  “Read the card” I said.  On the card was written, “Will you marry me?”.  She just looked at me with a beaming smile, and I asked the question.  Nicky just welled up and burst into tears.  After some time, I had to ask again, “well will you?”.  Eventually she said, “yes”.  The people in the restaurant applauded, and Kiean arrived on cue with a bottle of Champagne.  It was perfect.

We didn’t even finish the Champagne before I was hurried outside to ask Nicky’s mother and brother for their permission.  They were delighted, although it took a long time before we could get through to her Mum, Barbara.  I phoned my parents, Zoe, and my cousin to tell them the news.  Everybody was delighted!

We had a quick drink in the Marlborough after all the excitement, but I still wasn’t feeling right, so we headed home.  When we got back we headed to bed, with Nicky buzzing with ideas and plans.  The next morning I woke up with uncontrollable spasms, and Autonomic Dysreflexia. After 3 hours of trying we got an ambulance, and I was taken to Swindon A & E. We spent all day there with tests being carried out, and the symptoms carried on.  They kept me in overnight, but never really got to the bottom of the cause. When you can’t feel most of your body, it’s difficult to know where to start looking for the problem.  By Sunday morning I felt better, and just wanted to get home.  Nicky arrived with wedding magazines!  We spent the day getting ideas and talking about the plans, while trying to find a Consultant and get discharged.  I still have no idea what caused it.  But everything was OK, and we’ve been buzzing ever since.